Fellow Zimbabweans ,please be aware that Farai Bvumbe (pictured) has been accused of spreading HIV knowingly in UK .Please take this seriously .If you had musvo with him and he didn’t tell you that he is HIV positive (if he is) you need to go and have an HIV test done and you can file criminal charges against him if he infected you .

“In England and Wales, you may be found guilty of reckless HIV transmission if all the below apply: 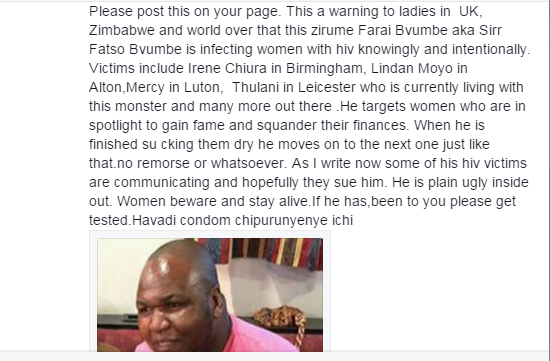 “Please post this on your page. This a warning to ladies in UK, Zimbabwe and world over that this zirume Farai Bvumbe aka Sir Fatso Bvumbe is infecting women with HIV knowingly and intentionally. Victims include Irene Chiura in Birmingham, Lindan Moyo in Alton,Mercy in Luton, Thulani in Leicester who is currently living with this monster and many more out there. He targets women who are in spotlight to gain fame and squander their finances. When he is finished sucking them dry he moves on to the next one just like that,no remorse or whatsoever. As I write now some of his HIV victims are communicating and hopefully they sue him. He is plain ugly inside out. Women beware and stay alive.If he has been to you please get tested.Havadi condom chipurunyenye ichi”.

Asked for his comments , Farai Bvumbe said he is suspecting that it is someone (amai Nickie) spreading lies about him after a failed relationship and he said he is not going to go into details about his private life because he has a family and is a nurse and if his boss sees such stories about him he can lose his job after which  he hung up the phone.