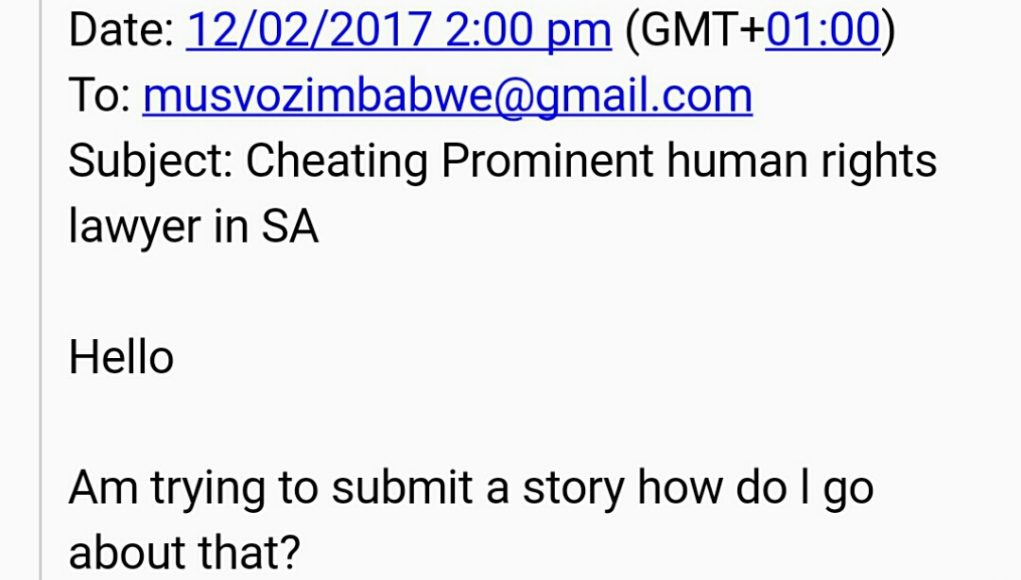 Dewa Mavhinga is now threatening to sue musvozimbabwe over the message we shared accusing him of cheating his wife with Sarah Rufaro Dhapi.However ,but both him and the alleged small house ignored requests to get in touch as indicated below .Just get in touch to discuss the story .Why rush to a lawyer instead of rushing to hear the story ?

” Silencing voices comes in different forms and in some cases it manifests as abuse of the law to frighten those who speak out .Human rights don’t mean oppressing voices  unnecessarily. ” said sisi Vee. 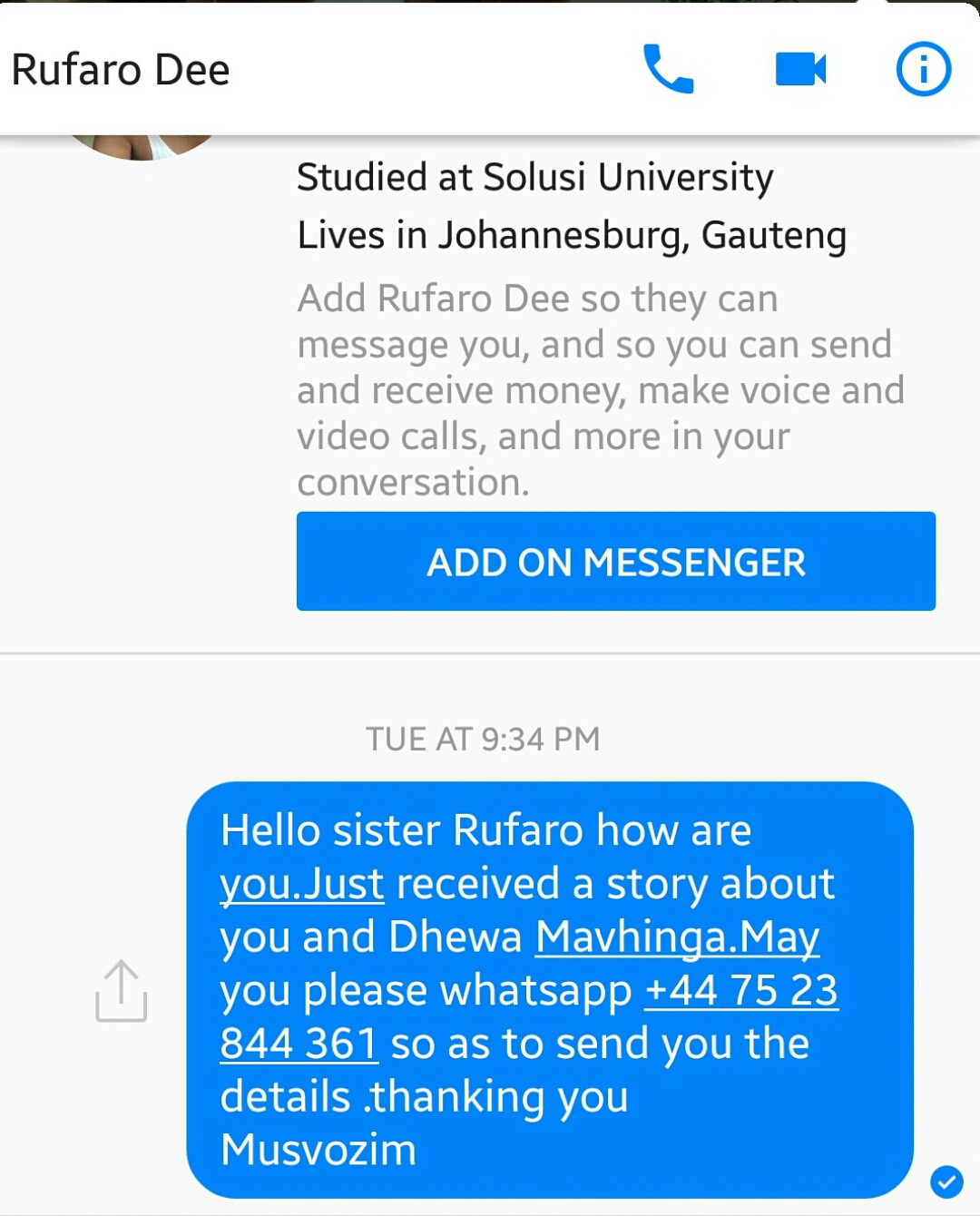 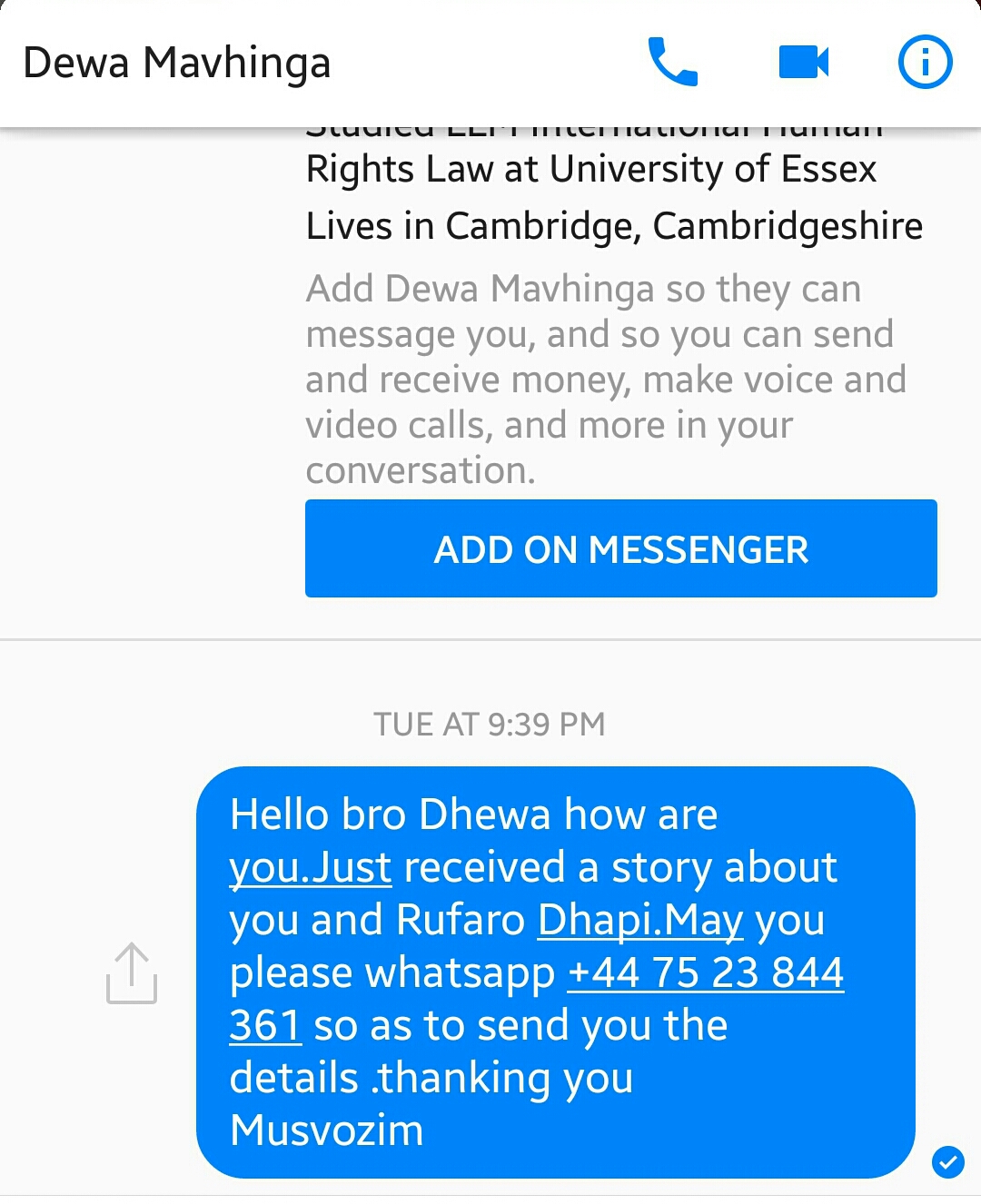 After sisi Vee made an effort to get Dewa and Sarah’s side of the allegations they both ignored.Dewa went on to make efforts to delete any information about the issue.

He then said his lawyer Mackencie is on the issue .

“l have been alerted of the baseless, highly defamatory story that appeared on musvo Zimbabwe website and l have since instructed my lawyers to take swift legal action to assert my rights. Be informed that the story is false and subject to legal action. Should you publish the same it will be liable for legal action. My lawyer in Harare in Mr. Mackenzie Ndebele, his mobile number is: 0775 553 317.” Wrote Dewa to others who contacted him over the issue.

His lawyer Mackenzie writing to another publication that intends to pick up the allegation said ,

I write to you at the instance of my client Mr Mavhinga. I am instructed that you are persuing a story published by musvo.com. I urge you to carry out investigative journalism and act professionally. My client denies the allegations and be advised that the story is baseless and you may risk a lawsuit if you echo the article. My client feels that the matter is capable of being resolved amicably and I am fully instructed to act on his behalf should need and chance arise for a roundtable. However should you proceed to publish the mandacious story l will proceed to sue you, your employer and/or those you represent without reverting to you.”

“Shame.It’s really sad when men you think should know better ignore the opportunity accorded them to highlight their side of the allegations but rush to seek legal action.The law is just an instrument abused by others to silence voices like the the POSA and AIPPA you claim to be against.There’s no need for the childish legal threats.Just use the golden opportunity accorded to you to say your side of the story .Law should never be used to terrorise voices into silence .Well you can sue sisi Vee for sharing the accusation but that is not an answer to the allegation.The question remains .Dewa are you cheating your wife with Sarah as claimed by the writer to sisi Vee.” said sisi Vee