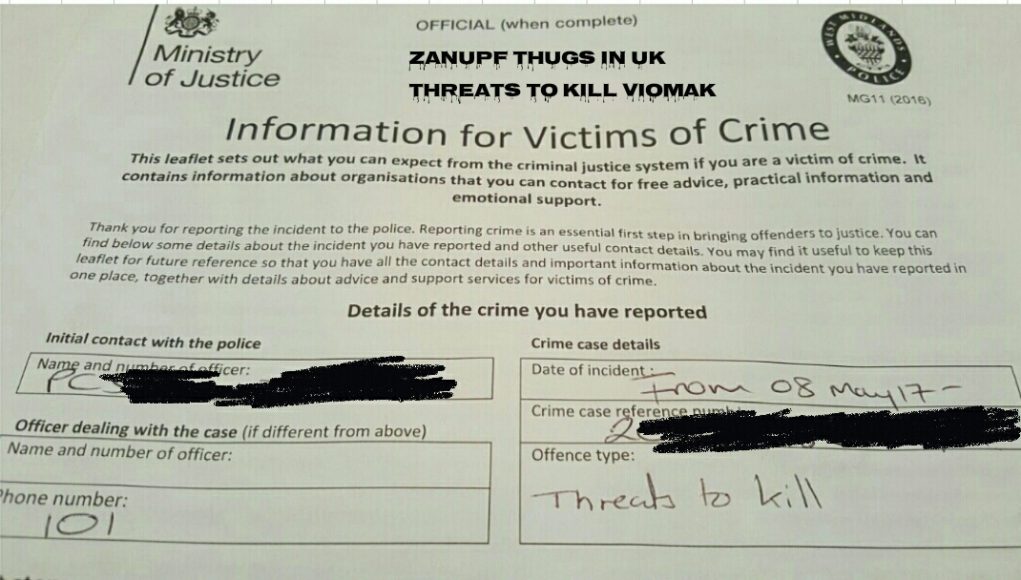 A police detective @ pnn.police has now been allocated the case where unwavering anti-mugabe advocate Viomak was threatened in the last two days by a UK Zanupf thug on whatsapp

The whatsapp messages which were sent by the thug ranged from minor threats to huge threats.The UK based thug who was so desperate to get to Viomak even went to the extent of saying they were 100 % within a few miles to get to Viomak.

“I am so pleased with how the British police are handling the case.Yesterday I spent a good four hours at the police station giving statements .The day the thug started I did not take it seriously as usual as someone who is so used to zanupf thugs’ threats and some haters threats.I asked the thug to stop but as usual it kept on going.I then said I will now take action ” Said Viomak.

Viomak then reported to the police. Viomak  remains a significant target for zanu thugs  and their associates and haters who work with them to target her.

Concidentally a few months ago HRDViomak wrote to the British Prime minister Theresa May querying why Britain is harbouring the zanupf terrorists.

“I am really thanking God that this thug terrorised me .Really messed with the wrong person as if they dont know.It was about time to expose these UK zanu thugs to high profile terrorism detectives .God has really opened a golden door for me .Our residence has now been placed on high alert ‘surveillance’ whereby if we call the 999 emergency number all police in the ‘area’ will leave what they will be doing to attend to our call.Thank you British police.”Said Viomak

“Meanwhile the detective has given me his email address so will be emailing him as soon as possible, the names and contacts and videos of zanupf terrorists in Britain…Thank God he created a way for this to happen.Will definitely email zanupf thug Nick Mangwana’s details  and the like. Will also email the details of all the thugs who terrorise/d me and their counterparts who work with them including the haters .Now the police will monitor and know who to investigate if the need arises. If anything mysteriously happens to me  anywhere in the world these are the suspects the police will approach first. They will now be monitored closely… the UK zanupf thugs and their associates who want to see me dead for despising Mugabe etc.” Confirmed Viomak.

The UK number now under investigation : As Human Rights Defender Viomak(HRDV) reports a zanupf thug in UK who was spamming our inbox with terrorising messages which degenerated into death threats…since 8 May 2017….using a pay as you go +44 number .

The stupid thug one of the many in UK who terrorise  Viomak was using whatsapp to send the thuggish messages.It thought it was hiding on whatsapp.However  British police said they can trace the cells where the number was activated from and subsequently sending the messages from….After which zanupf cells in UK have been logged in as terrorist groups in UK….The UK service provider is now known to Viomak and the police.