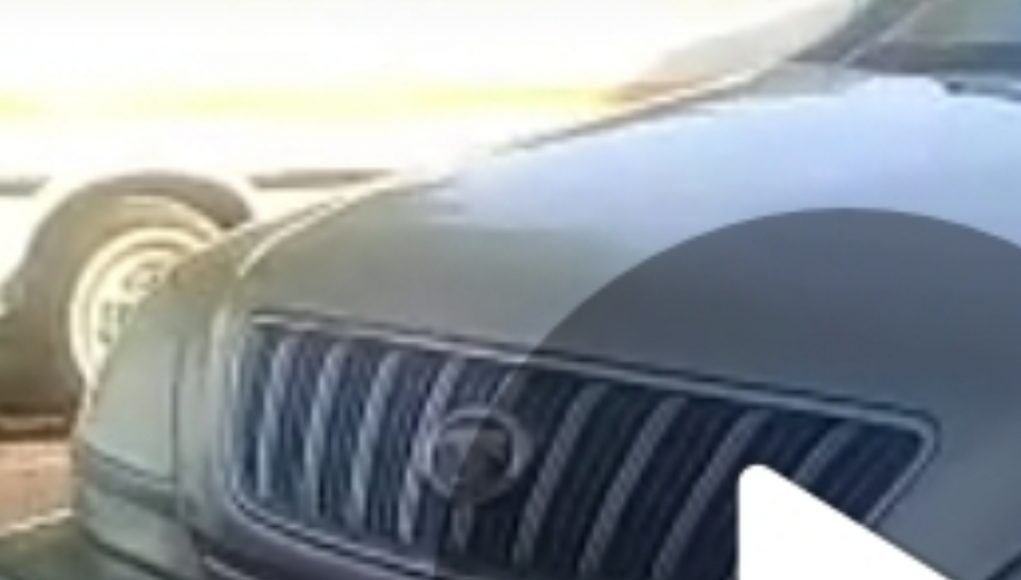 These are the kind of questions asked in court.

It is very important to get this right from point A. It could be the target was Chamisa and his men managed to protect him by fighting off the abductors and then whoever the abductors are went on to manhandle his driver who most likely could have protected Chamisa. Can someone in the know ..how ..please make it very clear …whatever happened.

As it is unotozvishairwa pazvo kuti who was to be abducted. It is obvious there is a fracas going on in the video but when media give different reports on who the target was then FAKE will be the most appropriate word because of biased/poor reporting….Report truth and stop reporting on behalf of political parties ” Said sisi Vee

” Kubangotaura kuti there’s something amiss about the video . I hope all those mdct bootlickers who verbally attacked me have learnt that critically analysing issues is very important .Let’s see who the car belongs to .If real zanupf CIO’s are to abduct him I dont think they will do it haphazadly moreso in broad daylight. Hapeno rekai tione but what I know for sure is if you take mdct mouthpieces like Zimeye seriously munonyara in future.

[10/11, 9:32 pm] Jan19: The chamisa thing cld be real mazimbabweans Takadyiswa too much toda kurutsiswa,ndiani asingazive mabasa ejunta,so many pple have been abducted kidnapped like dzamara but still we take such things likely kuti ifake hezvazodai,I am actually disappointed by the analysis of the guy on the audio.
What happened to Biti at Chirundu n Zambia pple still argue it was stage managed. Zimbabweans must wake up n believe Tinozoda kubvuma kana Iri hama yedu yatorwa

[10/11, 10:09 pm] Sisi Vee: Muri sei hanzvadzi. The analysis is on the Chamisa video and not on Dzamara and Biti’s experiences . Take it like an exam whereby you are required to critically analyse the video. So what is your take on the video.

[11/11, 4:46 am] Jan19: Morning cc Vee I get wat you are saying and myself I strongly believe it happened people must believe and raise alarm instead of doubting,it’s like a child saying I have been raped or even a woman saying she has been raped and people don’t listen and try to blame the victim.
Chamisa did not stage manage he was under attack from unknown assailants and the cameraman simply interpreted what he saw,we are going to see how the story unfolds and surely Chamisa cannot take a public stunt like that one.
Obviously the junta puts someone on surveillance they consider a threat to state security n this is one incident in which the junta has employed a violent tactic rather than using poison or creating an accident.
Less rally behind Chamisa and fight the system yakaora not to try and defend the government yatoziva kuti yawora and when it does something wrong pple rush to quickly defend it that Chamisa is seeking attention internationally he is broke wants more money,shame on people who have that opinion

[11/11, 10:14 am] Sisi Vee: Your problem hanzvadzi is you are sounding like an mdc chamisal bootlicker . Thats very dangerous. I feel sorry for you because your brain does not critically analyse. It just sees Chamisa and says yes to everything .Now you are expecting everyone to rally behind him.Itai semurume hanzvadzi. Did you hear that statements have changed …
the truth is now out .It is Chamisa’s driver who was being taken in the car and not Chamisa ….that’s why the video was not making sense. It’s not him being abducted. So what have you got to say now hanzvadzi

[11/11, 12:31 pm] Jan19: U got it all wrong we are basing everything on assumptions let’s see more details then we comment accurately there are two sides abduction or fake story those who say it’s fake I can argue they are zanupf apologists

[11/11, 12:32 pm] Jan19: But was just saying while we await for the truth to come out Zimbabweans must not just rush to dismiss wat happened yesterday as fake

[11/11, 12:59 pm] Sisi Vee: You definitely got it all wrong in many ways. People are analysing the video vis a vis what has been said about it. Media has already published what transpired and that is why people are raising eyebrows because video haisi kuita as if Chamisa is being abducted as reported.
People are dismissing the video as fake chamisa abduction so that is where you are missing the point.

[11/11, 1:01 pm] Sisi Vee: I personally wont trust facts from an mdct supporter like you hanzvadzi kekekekeke it’s just like reading the herald regarding july elections 😂😂

[11/11, 1:05 pm] Jan19: 😂😂😂 mandipedza am not an Mdc supporter am independent though at times my opinions achifanana with most political parties in some areas.
The biggest downfall yedu Zimbabweans we don’t have a unity of purpose we discourage one another if one raise alarm we say it’s fake quickly wen at times it not it

[11/11, 1:12 pm] Sisi Vee: 😂😂😂 You discuss like am mdct supporter . People only dismissed the video as fake chamisa abduction because it is not adding up otherwise we just call a spade a spade and just dont rush to say fake when there is no ‘evidence’ .
I understand yea that you could be an independent someone but I can feel from your ‘voice/argument’ that you sound more of an mdct supporter than anything else.

[11/11, 5:00 pm] Jan19: If u had time to listen to Chamisa rally in Marondera his statements were bold,he attacked ED so as you are aware the junta is in panic mode they are fighting war on two fronts internally and against Chamisa and the environment is volatile at the moment.
That alleged kidnapping to Chamisa or his driver want to believe it was not stage managed but the junta sent warning shots to Chamisa to stop him wat he is planning.

[11/11, 5:06 pm] Jan19: The government thru mutsvangwa monica confirmed the incident and they say it was Chamisa who attached the unknown guy
They argue that Chamisa thought it was C10 following them they confronted them and the harrier driver has made a police report
So we are going to see how it unfolds

[11/11, 5:12 pm] Jan19: The Government denied that it was C10 but they say Chamisa n his crew confronted the Harrier guys vachifunga kuti iC10 following them

[11/11, 6:26 pm] Jan19: I strongly believe the state though denying the charge are involved in this and it was meant to initimidate the opposition.Their argument that Chamisas team confronted them is very doubtful think mota iyoyo yakavatevera for a long time.The statement is quiet on the guy who was in the car when it sped off and then he jumped out of the moving car

[11/11, 6:30 pm] Jan19: The government does not walk the talk and chamisa akarova mapunchline ku Marondera vari kumuda Shadreck mashayamombe was also present at that rally

[11/11, 6:35 pm] Sisi Vee: Thank you. I dont think his words whatever he says at rallies zvingatyisa mazanu zvekutoronga to abduct him 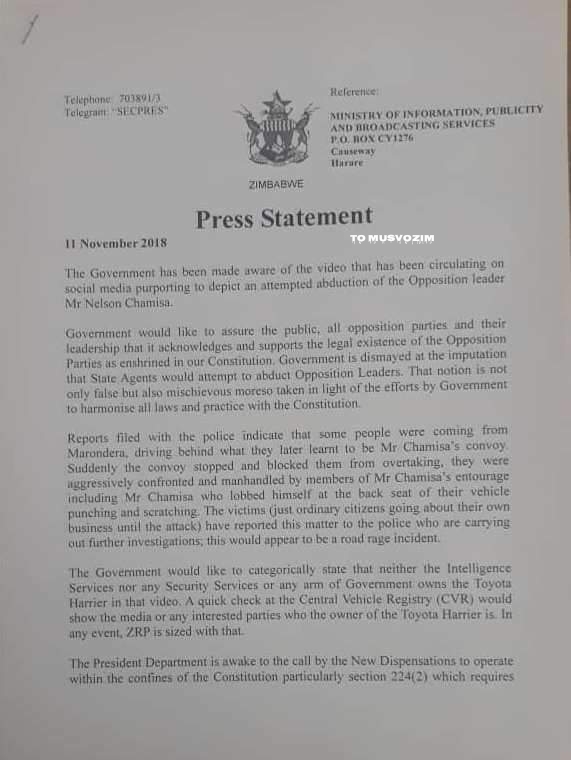 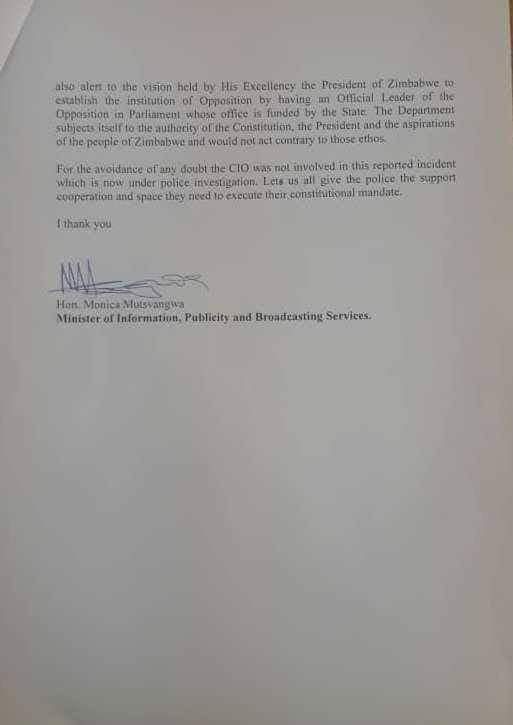