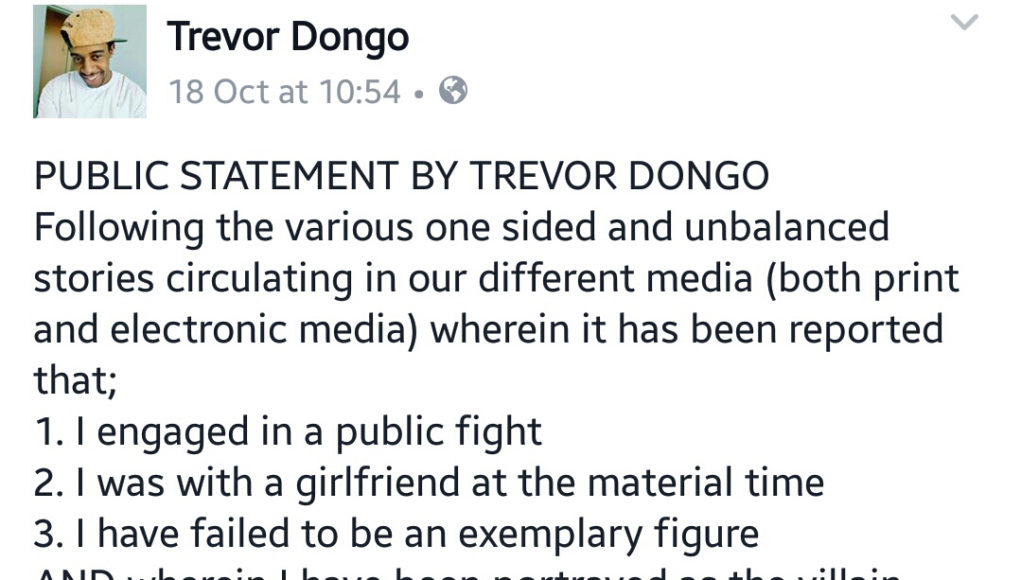 ————–
” Some women… and according to the video the so called wife was nowhere to be seen trying to helplessly help her husband.Even by biting the assailant on his buttocks and scratching his back or even kutema negogo kugotsi or kutsvaga dombo let alone scream achidhonza assailant .Very weird wife indeed.Asi ngewemubhawa kani mukadzi wacho ” ….Sisi Vee
—————-
” Following the various one sided and unbalanced stories circulating in our different media (both print and electronic media) wherein it has been reported that;

1. I engaged in a public fight
2. I was with a girlfriend at the material time
3. I have failed to be an exemplary figure
AND wherein I have been portrayed as the villain who fought with his fans; I wish to briefly state and clarify the following :-

Contrary to the circulating stories;
a. I never fought with anyone or engaged in any public fight but I was defending myself and my wife from the individuals who first mobbed my wife, saying offensive and abusive words at her

b. I was with MY WIFE and not with a girlfriend

c. My wife and especially myself are the victims in this matter but it is very unfortunate that the story that was sold to the public first is to the contrary.

d. This very unfortunate incident has left me injured and both myself and my wife extremely traumatized.

e. I personally regret finding myself in this unfortunate situation but it is not one that l voluntarily chose to walk into.  I did not attack anyone first but I was attacked first.

f. While I am cognizant of the fact that my lawyer has advised me not to comment on the merits of the case which is now before the courts; I wish to advise you all that soon after the unfortunate incident I went and made a police report at Five Avenue Police Post, l managed to identify one of my assailants who was immediately arrested by the police. Witness statements were recorded from eye witnesses who witnessed what really transpired (including a statement from my wife).  I have since been medically examined by a doctor and am currently assisting the police to identify and apprehend the other accused persons who assaulted me.

After all is said and done I wish to APOLOGIZE to everyone and especially to all my fans who feel that I let them down. This was a very unfortunate incident and situation we both found ourselves in together with my wife but nonetheless I AM VERY SORRY.
I also want to take this opportunity to thank everyone who has stood with me and my wife during this difficult time. I wish to thank all my fans who remain loyal and have not lost the trust and confidence they repose in me as an artist, your support has been and remains a pillar of strength during such difficult times.

MusvoZimbabweNews wishing you ALL a merry Christmas

We are what we are today because of you: Thank you very much