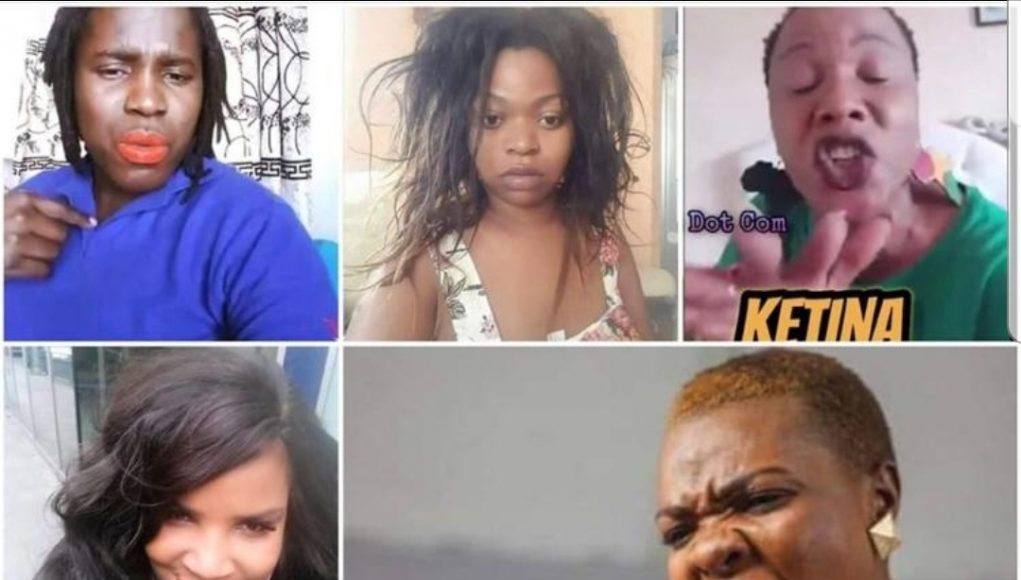 Opinion : A tale of a lost society , sewage media and the promotion of sorry female influencers : Case in point Fella’s observation.The list is not exhaustive but just some of them mentioned.

The women , Felistas Murata ( Felistas Edwards) mai titi , Cookie Mudiwa , Zuva Habane and others have been mentioned by Fella for being a disgrace to womanhood. The trio do facebook live videos using all sorts of verbal and physical threats and vulgar. 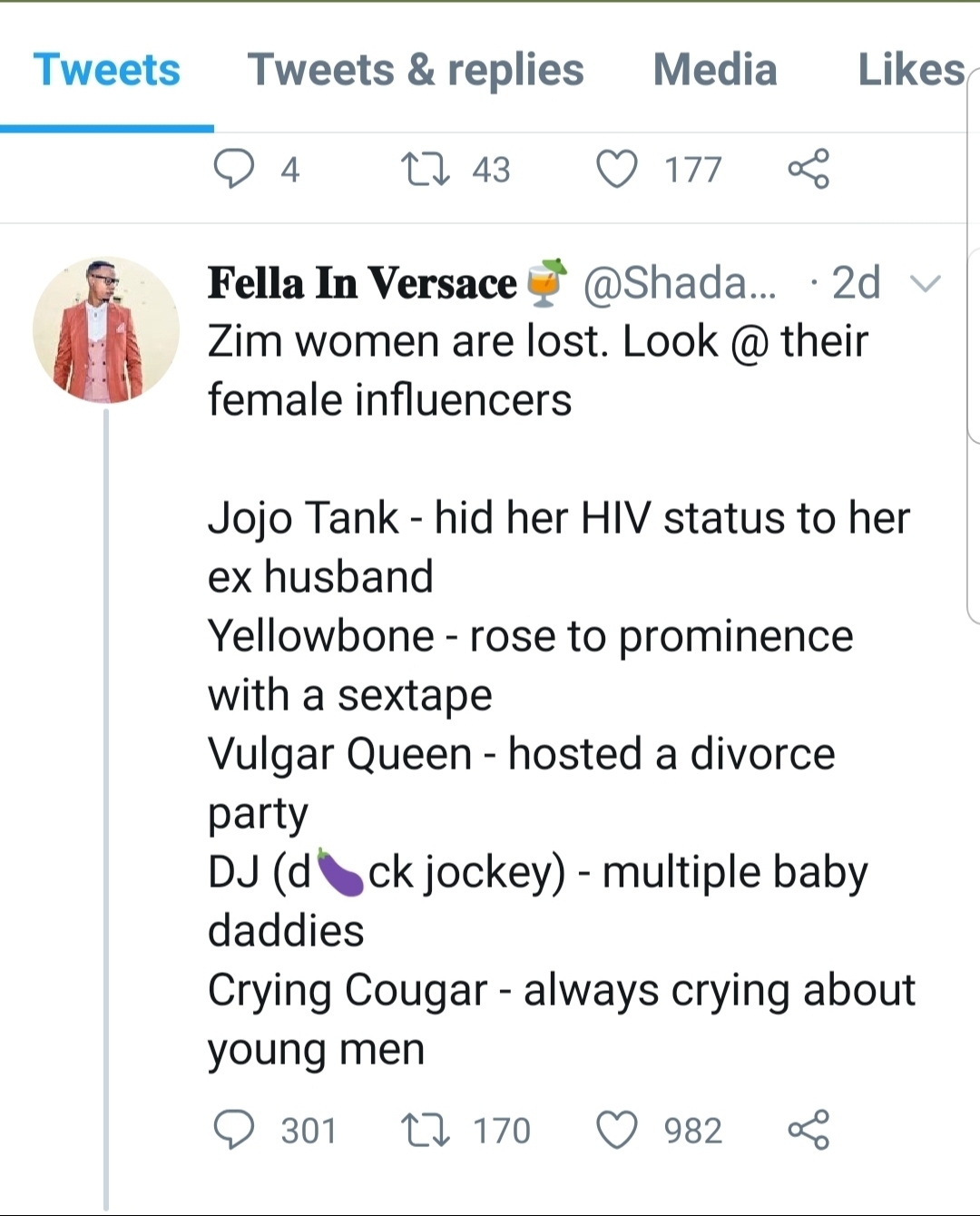 “Thank you so much Fella for raising this disturbing 😴 mind boggling issue .I always touch on it in passing. I’m writing about it now just because I have to write about it inspired by your spot on comment. Otherwise ,the reality is what I’m going to say won’t even make sense to most of the female populace . Even if it makes sense to them it will just go through their vaginas , pass through their buttocks enroute to the toilet seat. It’s a hopeless situation, the reason why women empowerment has failed in this nation. They don’t even know the difference between empowerment and equality. This is partly why they promote nonsense by their own because they think it’s women empowerment. Worse for equality. They think having a duty roster with husbands to wash dishes , clean the house and feed the baby is equality. This is the ignorance crisis we are faced with and manifesting in the promotion of nonsense.They have no clue how what they promote impacts on them….genuine dumbness. So sad 😭.

It’s a case of a nation cursed with severe ignorance and acute stupidity . As they say life is what you make it so yes they are making it a life of breeding low lifers as you quoted. They don’t see anything wrong. When someone lives with ignorance for extended periods , ignorance becomes the norm and their way of living. It becomes part of them and this is exactly what has happened in our Zimbabwean society. Imagine, in this day and age this society is still claiming that they are learned , despite the vast proof that we are a nation of idiots. Who has a working brain celebrates the nonsense I have attached but they do celebrate. They actually think I’m jealousy and I hate the success and achievements of other women . They actually call this embarassing and degrading behaviour great achievements. These are the females that even the media portray as Zimbabwean women who have succeeded in our society. So sad 😌.

The other problem is, after people choose to live the way they want to live their lives ,many people analyse and view the society according to the choices that these people have decided to live their lives. Human beings like other animals and nature don’t exist in a vacuum . All these exist together , races , gender ,age ,class etc.

Fella in Versace is there 100 % right when he views Zimbabwean women according to what he currently sees as the ‘influencers’ in our Zimbabwean society , which is a shame. Thank you so much again Fella in Versace for observing and raising this important issue. You are obviously not the problem but you are part of the solution regarding this nagging and persistent problem 💋👏🏽.

Now here is the problem 😴 that has emanated from the choices we have made to live our lives. Every Zimbabwean woman has been put in the cluster of these losers. These low lifers are now a reflection of Zimbabwean women which is such a shame and a very good example of how societies destroy and degrade themselves and subsequently become the laughing stock of the world.

1.What is the cause of this problem 🤦‍♀️. It’s a cocktail of factors. In short the cause is
a nation of brain dead goons which breeds such kind of female influencers whatever they are influencing which is in short despicable behaviour. This has resulted in Fella and many others viewing ALL Zimbabwean women as worthless.

2. Why do these braindead goons breed these kind of influencers 🙃. It’s a cocktail of factors. The bottom line is at times a majority simply means that all the fools are on the same side.

3. How does this society of brain dead goons breed such kind of influencers 🙄.

a. Promotion : The society of braindead goons promotes these kind of female influencers. *The promoters being individuals and the media .* I have been in the diaspora since 2001 and I have closely followed what the society and media here generally promote ….and this explains why we dont see idiots and losers influencing their societies in acceptable ways. Their media will stop the nonsense by bashing , denouncing , calling them all the bad names they deserve until they stop. The society will challenge and denounce this kind of behaviour and make sure such kind of sewage influencers will never see the light of day but will see the dark of night. This is why we don’t see the Oprah Winfreys behaving like your sewage female influencers.

Watch these videos and reflect on what these low lifers are influencing in our society. Is this what Zimbabwean women or females are made of ? This is the impression that Fella and many others are getting…..and some people wonder why I call our media sewage media.

4 . Where exactly are the *root* causes of this problem that breeds such kind of female influencers who should be in the dust bin ? It’s a cocktail of root causes not one root cause. The Chinese can explain this far much better than me and even illustrate using diagrams and technology. Watch their videos and convince them that we are just dark skinned people and not idiots.

The bottom line is our nation is politically , economically , socially and spiritually DOOMED 😭 , and unfortunately there’s no hope to do better in the near future unless we change the way we think

1. Challenge yourself and demand that you dont promote a society of sewage influencers. The effects of your stupidity negatively affect yourself , your children , your society and how others perceive the whole gender . This is common sense but it is not common.

2. Challenge your media and demand that they don’t promote a society of sewage influencers. The world is watching and laughing at us. Look at these females’ behaviours and reflect on how they are influencing your society and impressions about you across borders. This embarassing behaviour that made Fella to post that twitter comment is what your media is promoting with your support . This therefore means that you are part of the problem and also part of the solution.

A better and respectable society starts with you and how you behave when you see wrong and evil prevailing. If you want others to respect you, respect yourself first. Embarrasing behaviour prevails when fools support it . It’s you who is supporting this behaviour and not the Chinese or the world. Not everything that comes into the public domain is worth promoting. No when and where to stop .The negative impact comes back to our individual selves , our society and how the world perceives our race and sanity.

The reasons why the world looks down on us black people is also grounded in the problems above 👆🏽👆🏽. Other races just don’t wake up and say blacks are monkeys from nowhere.They see our monkey behaviours. Other races just dont rise up and day dream that blacks are idiots .They see our idiotic behaviours . People like Fella dont just get to twitter and start typing that ,

” Zim women are lost , look at their female influencers”

They see where we are lost. We need to go back to the drawing board and find our lost selves before it’s too late.

These critics are not racists or haters….They are observers of truth and whistleblowers of note who should be respected and thanked for opening our eyes and brains👌. Close your legs and zips and open your brains 🧠 and start thinking. The world is trending fast and they will come a time when all fools will perish. Mark my words.

You can now go on and curse me and call me a hater ,an idiot you name it, because I denounce the nonsense that you promote and call fools , fools. I don’t expect to hear sense from fools .I know I come from a nation infested with idiots but give the Chinese a break. They just say what they see about us in the same way we say what we see about them . If you behave like a fool people see your stupidity.As simple as that. Whatever you can call the Chinese go on . The reality is it won’t change the truth that our nation and race is infested with braindead goons. What therefore needs to be changed is ourselves and not how other races perceive us. If we change ourselves and stop promoting sewage people and sewage media , the world will say the good that they see about us and not the idiocy that you promote. This is common sense but it is not common in stupid people 🥴.

Of the brainwashed blacks aka fools : 181 years ago